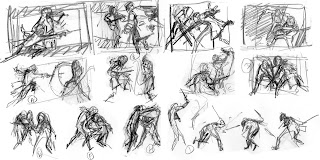 I was mentioning in an earlier post characters fighting with a violin. It goes something like in these thumbnails.
When I animate, I don't actually do thumbnails any more; I found that it was producing too many ideas and I ended up having to either cram too many things in a scene or let go of drawings I had already fallen in love with.
No difference here, as these are in fact thumbnails I did in preparation for the storyboard.
No comments:

Rough of the week #3

I spent most of the past week inking and coloring in earlier drawings so I had very few to choose from. And since I felt the other roughs might be telling a bit too much about the story, this was all that was left...
No comments:

I am not a musically inclined person and one might wonder why I would end up telling the story of a violin maker.

There was a plan, before the end of production on 'the illusionist' to keep the senior crew together to go on and make more movies. (For those unfamiliar with the animation industry, studios are usually created for one production and closed when the film is completed.)
The animation director, Paul Dutton was the driving force behind the idea and some of us even did a few drawings to illustrate some of his story ideas.
One of the projects I liked and wanted to see made was 'the fiddler's pieces', a story loosely inspired by the violinist Paganini, who was rumored to have sold his soul in exchange for his incredible abilities.
I started volunteering more and more ideas, further and further removed from the outline, so much so that at some point I had gone completely off.

One of my favorite idea, (and quite honestly the weirdest) was to make the guy duel with his violin. I know it sounds silly, but I was sure it would look good, so in order to sell the idea, I started making some tests and quickly found I needed context, a short story to set up a fight.
The context that I started writing grew and grew and it became, over the following months,the story I am now spending all my free time illustrating...

Rough of the week #2

I spent all week doing this roughs and It's great to get into a flow and just draw ahead, but when I have to go back and ink them in, which I started doing last night, it's a lot less fun. Then again, I really like seeing the drawings finished with the final line.

Anyway, still in the middle of the same scene, getting closer to the end of chapter 2 and Francesco is still not behaving...

Rough of the week #1 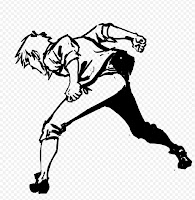 Every week I'm gonna try to post a rough I've been working on, that hopefully you'll recognize when you read the whole thing. (one day...)

I didn't have much to choose from because until mid-week I was working on bgs for the end of chapter two, but I quite like this one, happening at an emotionally intense moment for Francesco.

It's a bit sad that these drawings do not have the raw energy of pencil roughs, but they act as a good, solid foundation for the final image and it's all that really matters.
No comments: 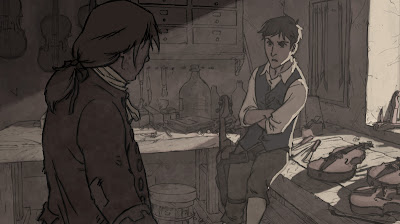 Francesco is a violin maker with an attitude problem..
I feel people may actually want to punch him after they've read a few pages. I'm not sure it's a smart choice of character but I guess it's one of the reasons I could write this story in the first place. The thing is, I usually care too much for my characters and I become really reluctant to hurt them, which is not good for story.
I don't really have this problem here as Francesco goes through a whole lot of trouble.
2 comments: 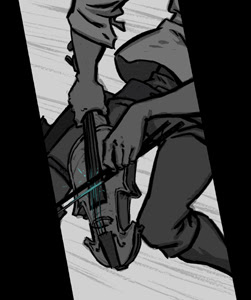 You might be wondering what that weird-looking violin is... to be honest, I sometimes wonder myself why I decided to focus the story around it; violins are hard to draw!!
No comments: