Rough of the week#7 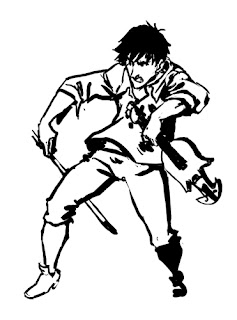 Finally some action!
I might regret ever wanting such scenes in a couple of months, after I've spent so much time on them, but so far it's just good to be able to stretch my legs a little.
Funny thing though, this short sequence is really at the heart of the project, both in terms of story and motivation. In many ways, I've written the whole thing around it and just before starting, it's silly to say, but I was actually a bit scared and I did a whole bunch of little things beforehand, dragging them as much as I could.
It has happened to me on a few occasions before, but never quite as much as this one; not only have I waited for more than six months for this moment, (with all the expectation that goes with it) when it has finally arrived, I had no one with a paycheck forcing me to go for it...
Well, I managed to convince myself it was more excitment than fear, I got to it finally early this week and I suddely realized that I'm not too familiar with these type of scenes (see my post about my love of long, un-hurried scenes ) and I'm having a bit of a hard time.
The hardest thing for me is to convey impact and of course, clarity.
Clarity is always of the utmost importance in animation, but I haven't really develloped the tricks to make it work for short scenes yet.
Ah well, doing it and making the mistakes is the best way to learn...
No comments:

Rough of the week#6 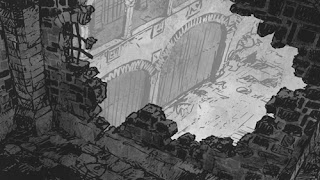 I must start sounding like a broken record, but backgrounds have been taking a lot of my time on this project.
Arguably though, most of chapter 3 is more of a short than a comic, so it makes sense I would prepare the layouts all at once.  I'm almost done for the first part and then I will probably only animate for the next couple of months, but the sad part is that I'm sort of becoming better at this whole bg thing and the old ones don't look too good anymore.
There is one in particular that I never liked, but that I had spent so much time on and struggled with so much that I didn't have the heart to redo it. I guess now is the time...
No comments:

Rough of the week#5 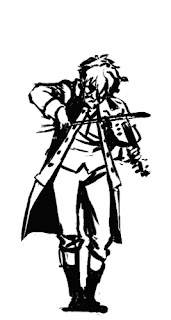 I apologize for celebrating so unashamedly, but this one has been pretty painful and I'm glad to see it go. I'm not sure why; probably because of a long stretch of dialogue interspersed with bits of complex animation just before the end, that never seems to end. In any case it's done and introduces a new character.
I debated keeping him secret, but he will figure so prominently in the next chapter that I figured he would probably show up again in the next couple of months...
No comments:

Rough of the week#4 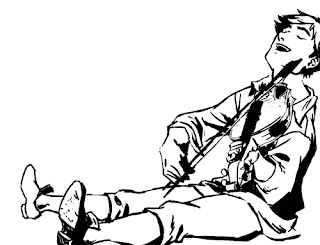 Again, not much to pick from this week; again, because of those damn bgs...
The best part for me in drawing bg's is that it makes me appreciate when I get back to the characters.
Does it mean that I enjoy drawing characters as much as Francesco seems to enjoy his violin?...
I hope not.

In any case, he's about to be disrupted in a big bad way!
No comments: 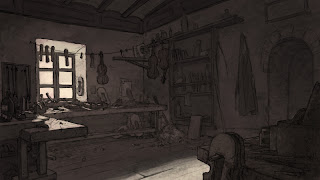 In embarking on a comic type project, one of the toughest things for me (a character animator by trade) was to create backgrounds. I agonized about that for weeks, trying everything I could to make it look good and get them done fast...
I tried hard, but in the end, I discovered a cruel truth, to make good looking backgrounds, you have to spend the time... Aaargh!!!
1 comment: